Goose wings were used for dusting and cleaning the way we use small vacuums today. Goose feathers were saved and used for pillows and for comforters. The large feathers were stripped from the stem which was then discarded. I last slept under a feather comforter while visiting relatives in Germany. These comforters are “light as a feather” and very warm.

Plastic rings in several colors were available to put on chicken legs. Different colors designated the year and could be switched from left to right leg to separate a chicken from the rest of the flock. We would find many uses for the chicken rings.

Occasionally girls would wear belts or necklaces made from the rings. Aluminum bands were also available and had dates stamped on them.

Even before I started to drive, I would service the car and truck and replace the fluids. Used crank case oil was used to paint the chicken roost as a preventative for mites. We also mixed sulfur with the oil and treated the dogs for mange.

Most bottles that could be opened and resealed came with cork stoppers. Corks were always needed for bottles and for fishing lines.

When the bottoms of wooden posts rotted off, these posts were used on lower fences and then saved to make a bonfire for cattle that had died from anthrax.

Each year we got new license plates made for us by the Texas department of corrections at Huntsville. The old plates were used to patch roofs where a shingle had blown off, to patch a hole gnawed by a rat, and as a temporary A-frame for bedding plants in the garden.

We bought our syrup in gallon buckets, The syrup buckets had a stout handle or “bail” and a tight-fitting lid. They had many uses on the farm such as storing seeds, storing lard, and for lunch pails.

Leather shoes were resoled until the tops worn out. The soft tongue was good for making tire pump leathers.

Paraffin wax was recycled to seal jelly jars. We also chewed it instead of gum.

Stay tuned for Part 3, the finale. 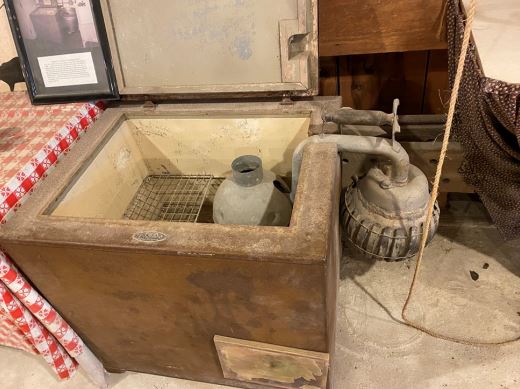